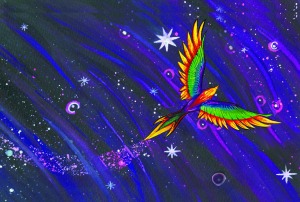 I have a lot of short stories lying around doing nothing. I’m going to start feeding them out. I might even interview myself afterwards. Lucky you!

Blinko peeled away the adhesive tape which kept the orange wig stuck to his head. It came away with a satisfying hiss, the dull fleshy scalp underneath contrasting with the greasepaint that covered the rest of his face. In the margins, his skin, his real skin, was the colour of an old woman’s tights. What hair he had left stuck out above his ears in tufts and curls, almost as if he had a natural clown’s wig. Which was, all things considered –

“You look more ridiculous with the wig off,” Sadie said. She lay on their bed, flicking through a magazine. On the back cover was an advert for perfume which featured a woman who looked like she was having an orgasm. Sadie wasn’t having an orgasm, although her lips were compressed into a tight, hard line, which was coincidentally similar to what she did look like when she had orgasms. That was years ago, though, and for all Blinko knew she might have changed things around in the –

“The years creep up on you, doll. What can I say?” Blinko carefully picked off the water-jet flower from his braces before unhooking them off each shoulder. Down went the giant comedy trousers – balloonish, girthy and solid as a circular shower curtain – exposing his pink-and-white polka-dotted stunt pants. His real pants, of course, were hidden underneath; grey numbers from Marks and Sparks, unspectacular, workaday, damp with sweat. He sat down heavily, trousers bunched at this ankles, and began to unlace his outrageously large –

Sadie sighed and flipped a page with some venom; it sounded like a sword-swish on an old Zorro film. “Do I really have to keep putting up with those things poking out from underneath the bed?”

Blinko chuckled to himself, buffing one of the giant shoes with the sleeve. “No, darling. You don’t have to put up with anything, at all.” He placed the shoes side-by-side on the floor, then eased them into the dark space beneath the bed.

“Someone came to ask about the house.”

“Oh yeah?” Blinko slipped off his pants, balanced them on the end of his toe, then flicked them towards the washing basket. He hit the target, of course, but this stunt usually caused Sadie to –

“Yes. A nice man. And his wife. They seemed interested. But they wondered about the shed.”

“What about the shed?” He turned towards her, and for the first time a frown dug deep trenches across the greasepaint. He was still a long way away from a scary clown, though. His body held no revelations for her; not the doughy middle section which filled out his shirt-front so well, nor the slow-punctured buttocks, or the hairy knees, and certainly not the stubby penis that hung its head shyly like a new born dormouse in the hay. He didn’t even seem ridiculous, with his hands on his hips, still wearing his shirt and spinny bow tie and nothing else. In fact it quite –

“They didn’t say anything. Not in so many words. But I could tell what they thought.”

“Idiot. I could tell they thought it was a mess. As well as all the equipment that they could see through the windows. I’m sure she asked him if one of your props was a blow-up doll.”

“There’s nowhere for the gear to go,” he said. “I’ll tidy it. I’ll tidy it as best I can.” Blinko stripped off his shirt and slipped off the bow-tie, laying them down beside the trousers, a riot of dots hanging off the edge of the dresser. Nude, he sat down and pulled a fresh wipe from a packet.

“It’s the silly hobby that gets you a holiday every year,” he said, swabbing at the greasepaint with savage vertical strokes. “Aren’t you going to ask me how my day went?”

Sadie tossed the magazine aside. “Oh, go on then. Surprise me.”

“A kid cried. The one whose birthday it was.” As he worked with the wipe, a face began to emerge; at first in dull patches, creasing along the worry-lines in Blinko’s forehead, and then in stripes; an owlish face, chubby at the cheeks with a naturally bulbous nose. “She came around eventually, but it was a worry. She was setting off all the other kids, and I thought the mother was going to have to take her out.”

“How awful. I told you. No-one likes clowns any more. They’re nightmarish.”

“Y’know, that’s not true,” Blinko said, stabbing a finger at her in the dresser mirror. “Kiddies love clowns. Don’t listen to that Stephen King nonsense. He has a problem with clowns, that’s his issue. But he’s in the minority. Clowns are lovely, not scary.”

“No. It is true. Children hate clowns. How many bookings do you have?”

“Every weekend?” She had a certain smile, one she pulled out whenever she scented victory, or blood, or both, a slight downward twist at the right hand corner, allowing the lower canines on that side to jut out, like those of a cat or a hyena or a vampire or a

“Not every weekend. What does it matter?”

“It’s time to grow up, Tom. We’ve been through this before. There are better things to do with your spare time. And it’s getting embarrassing. You know Andy and Sheila only booked you for Gayle’s birthday party because they felt sorry for you. Those kids just stood there, open-mouthed. It wasn’t entertainment, darling. No-one’s quite sure what it was. All that squawking balloon sculptures and shrieking and the jokes nobody gets. It’s-”

A phone vibrated all the way through the walls, below. “Excuse me,” Blinko said. “I’ve left my phone downstairs.”

“Your girlfriend again? Let me have a word with her – give her some facts and figures.”

Blinko closed the door on her laughter and padded downstairs. It was still light outside and some of the bluish twilight stole through the curtains, painting pale streaks across the magnolia paintwork. His phone flashed and heaved itself in slow hops across the dining table where he’d left it. He didn’t recognise the number on the viewscreen.

“Yes it is. Is that Mrs Blawhyres?”

“It is! Yes, Mrs Blawhyres, from the party.”

“Oh, um, nothing really. I just wanted to say hello, and to, well, congratulate you.”

“Congratulate me?” He snorted in astonishment. “Whatever for?”

“Well, I just think you did a super job. You put a lot of effort into that show, and the children loved you.”

“That’s a lovely thing to say, Mrs Blawhyres. I do try my best.”

“The adults loved your jokes, too. My friends thought you were terrific. My husband has bought one of your T-shirts off the website. We’ve all passed your number on.”

“That’s such a kind thing to do. I do hope little Emily wasn’t too frightened. Sometimes, you know, birthdays… it gets overwhelming. Hey, they’re overwhelming for adults, too, eh?” He seized a handful of flesh beneath his ribs and twisted it, grimacing at himself in a mirror on the far wall.

“Oh, Emily was fine… In fact, that’s partly why I wanted to call you. It’s just that she’s very very shy – but you turned it around beautifully. She loved the magic trick, and… she wants you to come back for her birthday next year.”

“Mrs Blawhyres, it would be my pleasure.”

“Well, you come across all kinds of children in my line of work; they can be a tough crowd, the little ‘uns! But they always warm up to it.”

“Oh, you were wonderful. Well… I just wanted you to know you did a bang-up job, and we’d love to see you back next year.”

“Thank you so much. And remember… What’s it all aboot?”

Mr Blinko hung up. Standing there, in the cool night, his lip trembling, he felt like he was on the verge of –